August 1st at 6:30pm Bill Roorbach, The Girl of the Lake 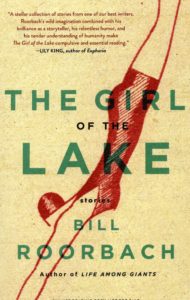 “The 10 generous, daring short stories in the new collection by the author of Life Among Giants range from tricky romance to dark comedy to breathtaking adventure. Roorbach casts his gaze on characters whose lives are spinning out of control. Sometimes they’re reeling from a loss, like the recent widower in “The Tragedie of King Lear” who loses himself, in more ways than one, in the role of volunteer for a summer stock theater. Other times, they find themselves violently, surprisingly in love, like the jaded narrator of “Some Should,” who posts her photo on “two dating sites, one snuggly, the other filthy” and ends up in a bar listening to the memories of an Episcopalian priest with a startling past. Roorbach can write a story that hones in on a couple of eventful days, like “The Fall,” in which two young lovers, perhaps less compatible than they had originally thought, start a backpacking trek through the Maine woods. He’s also capable, in a way that suggests comparisons with Alice Munro, of contracting the eventful lives of several characters into the space of a short story, and of embedding stories within other stories. Like the magical tales a wealthy immigrant spins for a bored and then enchanted sixth grader in “Harbinger Hall,” Roorbach’s cunningly crafted stories start off ordinary, and then turn magically strange.” –Publisher’s Weekly

Roorbach is the author of the bestselling Life Among Giants, which won a Maine Literary Award in 2012. An earlier collection, Big Bend, won the Flannery O’Connor and O. Henry prizes in 2000. His memoir in nature, Temple Stream, just released in a new paperback edition by Down East Books, won the Maine Literary Award in nonfiction 2005. He’s just been named a 2018 Civitella Ranieri Foundation fellow.

Bill lives in Maine, with his wife, Juliet Karelsen, who is a visual artist, and their daughter, Elysia Roorbach, an aspiring ballerina and full-time teen. 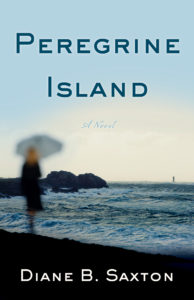 We’ll be on hand as Diane Saxton reads from her novel, Peregrine Island. Please note this event is NOT at the bookstore.

The Peregrine family’s lives are turned upside down one summer when so-called “art experts” appear on the doorstep of their Connecticut island home to appraise a favorite heirloom painting. When incriminating papers, as well as other paintings, are discovered behind the art work in question, the appraisal turns into a full-fledged investigation. Antagonism mounts between grandmother, mother, and child, who begin to suspect one another, as well as the shady newcomers in their midst, of foul play.
As the summer progresses and the Peregrines discover facts about their past in the course of the investigation, they learn that people, including them, are not always who they appear to be.

As a journalist for Vanity Fair, The Huffington Post, Holiday Magazine, and Greenwich Review, Diane B. Saxton covered everything from torture victims to psychics, animal rights activists, exotic travel, and movie producers. A new chapter opened up for her after interviewing Amnesty International US founder Hannah Grunwald. Alarmed that the stories of incredible and influential lives such as Grunwald’s could be lost as the Greatest Generation passes, Saxton began capturing their histories and compiled them into a 1,000-page biographical collection, which became the inspiration for her next novel. She brings the same gift for storytelling with illuminating subtext to her debut novel, Peregrine Island. Saxton divides her time between New York City and the Berkshires, where she lives with her husband, dogs and horses. 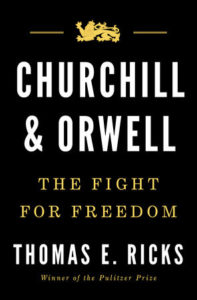 Please note this event is NOT at the bookstore. We will be at 3S selling copies of Churchill and Orwell. More details here

A dual biography of Winston Churchill and George Orwell, who preserved democracy from the threats of authoritarianism, from the left and right alike.

Both George Orwell and Winston Churchill came close to death in the mid-1930’s—Orwell shot in the neck in a trench line in the Spanish Civil War, and Churchill struck by a car in New York City. If they’d died then, history would scarcely remember them. At the time, Churchill was a politician on the outs, his loyalty to his class and party suspect. Orwell was a mildly successful novelist, to put it generously. No one would have predicted that by the end of the 20th century they would be considered two of the most important people in British history for having the vision and courage to campaign tirelessly, in words and in deeds, against the totalitarian threat from both the left and the right. In a crucial moment, they responded first by seeking the facts of the matter, seeing through the lies and obfuscations, and then they acted on their beliefs. Together, to an extent not sufficiently appreciated, they kept the West’s compass set toward freedom as its due north. 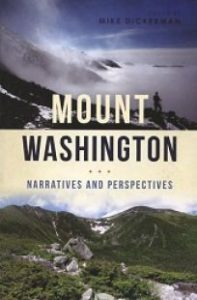 Back in print for the first time in more than a decade, this anthology of more than twenty previously written pieces inspired by New England’s greatest peak recounts the history of New Hampshire’s famed Mount Washington. It includes more than 40 vintage photos! Editor Mike Dickerman will be at RiverRun to tell us all about it.