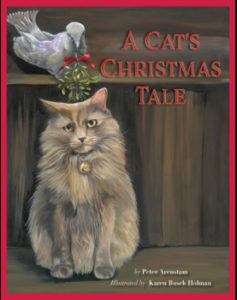 Author Peter Arenstam and illustrator Karen Busch Holman have created a magical story of a real-life cat who wandered into ‘The Christmas Dove’, a New Hampshire holiday store, in search of a name and found a home.

Arenstam and Busch have individually created many story books for children. Together, they have created a unique holiday tale with in a charming New England setting. 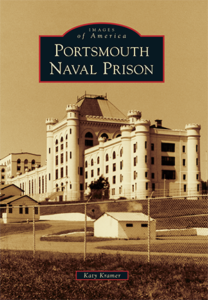 The Portsmouth Naval Prison, now vacant, sits at the far end of the Portsmouth Naval Shipyard on Seavey Island on the Maine and New Hampshire border. For over a century, “the Castle” or “the Rock,” with its deceptively appealing exterior, has kept both visitors and New Hampshire residents in its thrall. Since its opening in 1908 to its decommissioning in 1974 and into the present day, myth and lore have surrounded this iconic building. For the 66 years it functioned, any prisoner who escaped was brought back dead or alive–or so it has been said. Only adding to the prison’s mystique is its history of reform; particularly successful were the wartime restoration and rehabilitation programs. Although the prison’s fearsome reputation is cemented in Darryl Ponicsan’s “The Last Detail”, Portsmouth was a forerunner in many ways. Routine inside often reflected the latest advancements in the field. Yet, designed or deserved, the prison’s legacy remains an intriguing mix of dread and redemption. 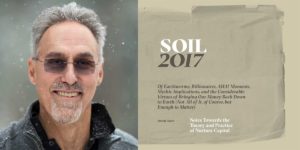 Since 2009, Slow Money founder Woody Tasch has been at the forefront of a new economic story—a story about bringing our money back down to earth. Published in 2017, Woody’s new book SOIL: Notes Towards the Theory and Practice of Nurture Capital is poetic, photographic, philosophical and radical. It is about billions and trillions of dollars in the global economy, and billions and trillions of microbes in healthy, fertile soil. Nurture capital is a vision of finance that starts where investing and philanthropy leave off, giving us a new way to reconnect to one another and places where we live, all the way down to local food systems. Come hear directly from Woody about his new book and Slow Money’s progress, including the $60 million invested in more than 625 small organic farms and local food businesses, via dozens of local groups in the United States, Canada, France and Australia.

“I love fertile soil, and, as much, I love fertile minds. Woody Tasch has one. His heart ain’t bad, either. He puts both to marvelous, and very important, effect in this book. It is a vital next step for all of us who care about food, farms, slow money and what lies ahead.”