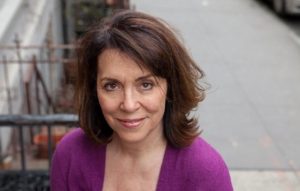 Poet Catherine Barnett will be featured in the Kittery Art Association’s annual Mangion Poetry Celebration on Saturday, May 11, at the First Congregational Church in Kittery Point. The event begins at 1:30pm, with a public interview and craft talk with Ms. Barnett. The program continues in the evening at 7pm, with a reading, reception, and book signing, with books provided by RiverRun Bookstore. Live music will be performed by David Graf on guitar and Kent Allyn on bass. Former Portsmouth Poet Laureate Kimberly Cloutier Green will serve as the host for the afternoon and evening events.

The suggested donation is $20.00 for both events or $15.00 for an individual event. All proceeds benefit the work of the Kittery Art Association. Doors open a half hour before each event. For more information, call 207-451-9384 or email information@kitteryartassociation.org.

What My Mother and I Don’t Talk About: Fifteen Writers Break the Silence

Note: This event will be held in the Levinson Room at the Portsmouth Public Library

Join two former RiverRun stars, Michele Filgate and Liberty Hardy, as they discuss Michele’s unbelievable first book, What My Mother and I Don’t Talk About. The book will release on April 30th.

ABOUT THE BOOK: **Named one of Spring 2019’s “Most Anticipated” books by BuzzFeed, LitHub, Bustle, The Rumpus, The Millions, and Publishers Weekly** 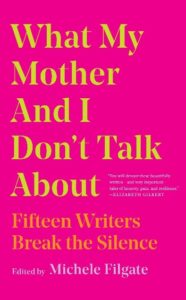 What My Mother and I Don’t Talk About is an anthology about the powerful and sometimes painful things that we can’t discuss with the person who is supposed to know us and love us the most.

In the early 2000s, as an undergraduate, Michele Filgate started writing an essay about being abused by her stepfather. It took many years for her to realize what she was actually trying to write about: the fracture this caused in her relationship with her mother. When her essay, “What My Mother and I Don’t Talk About,” was published by Longreads in October of 2017, it went on to become one of the most popular Longreads exclusives of the year, and was shared on social media by Anne Lamott, Rebecca Solnit, Lidia Yuknavitch, and many other writers, some of whom had their own individual codes of silence to be broken.

The outpouring of responses gave Filgate an idea, and the resulting anthology offers an intimate, therapeutic, and universally resonant look at our relationships with our mothers. As Filgate poignantly writes, “Our mothers are our first homes, and that’s why we’re always trying to return to them.”

Michele Filgate’s work has appeared in Longreads; The Washington Post; the Los Angeles Times; The Boston Globe; The Paris Review Daily; Tin House; Gulf Coast; O, The Oprah Magazine; BuzzFeed; Refinery29; and many other publications. Currently, she is an MFA student at NYU, where she is the recipient of the Stein Fellowship. She’s a contributing editor at Literary Hub and teaches at the Sackett Street Writers’ Workshop and Catapult. What My Mother and I Don’t Talk About is her first book.

This is the bit where I would normally say something goofy or embarrassing about Michele from her days at RiverRun, but frankly, I’m so freakin’ proud of her that I’m just going to say nothing, and instead list some of the early reviews for the book:

“These essays, each one exceptional on its own, encompass both love and writing at their most vulnerable, and could power entire cities with their electricity.”

“Astonishing…These collected essays are variously rich, tender, angry, despairing and clinical. The result, greater than the sum of parts, is part paean and part denunciation, intelligent, heartfelt and wise. What My Mother and I Don’t Talk About is a shrewd, glinting collection of beauty and pain: a gift for mothers and their children.”
—Shelf Awareness

“These are the hardest stories in the world to tell, but they are told with absolute grace. You will devour these beautifully written—and very important— tales of honesty, pain, and resilience.”

“Fifteen essayists—many luminaries—write unflinchingly about their mothers…Each one of these intimate and gut-wrenching essays reaches beyond itself to forge connections with readers.”

“The essays all address the authors’ relationships with their mothers in stories to be savored but not necessarily read in one sitting. …beautifully composed.”

“…a poignant collection of meditations on what it means to be someone’s child, at once raw, comic, and revelatory.”

“A fascinating set of reflections on what it is like to be a son or daughter… the range of stories and styles represented in this collection makes for rich and rewarding reading.”

Where to find us

We love to push our favorites on you, and now we’ve enlisted hundreds of customers to help us. Click here to find your next awesome book!