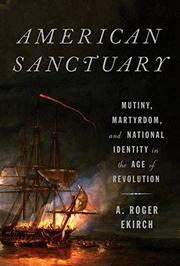 The extraordinary story of the mutiny aboard the frigate HMS Hermione in 1797 (eight years after the mutiny on the Bounty)–the bloodiest mutiny ever suffered by the Royal Navy, that led to the extradition from America, and the hanging by the British, of the martyred sailor Jonathan Robbins. This event plunged the two-decade-old American Republic into a constitutional crisis, and powerfully contributed to the outcome of the U.S. presidential election of 1800. It propelled to the fore the fundamental issue of political asylum and extradition, still being debated today–more than two hundred years later.

A. ROGER EKIRCH was born in Washington, D.C., and raised in Alexandria, Virginia, and Delmar, New York. He is the author of Bound for America, Birthright, and At Day’s Close. He holds degrees from Dartmouth College and John Hopkins University, and is a professor of history at Virginia Tech.

The 1st Annual Acoustic Poetry After Hours brings local acoustic musicians and poets together for a magnificent night of music, poetry and fresh summer air. Situated in Vaughan Mall, there is sure to be ample seating, yet be prepared for standing room only! We start promptly at 7PM, so be sure to allow enough time to find parking!

New Hampshire foster care is in trouble. In order to raise awareness and money for the foster care system in New Hampshire, a group of young poets and prose writers will be gathering to perform their work at River Run bookstore on Monday, July 17th at 6:30pm. The number of children in the New Hampshire foster care system has been rapidly increasing since 2014, the Division of Children, Youth, and Families (DCYF) finds. Along with the growing number of foster children, the system is plagued by a lack of foster families and resources. Some are calling the situation a crisis. Come hear the youth of New Hampshire as they speak in solidarity with their peers, and show your support for our state’s most vulnerable children. 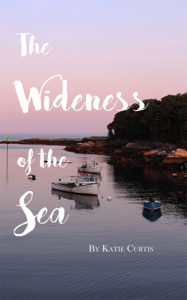 It is our great pleasure to announce the publication of The Wideness of the Sea, a terrific New England novel, and one of the winners of our 2016 novel contest. Join us for a kick-off celebration, and help us launch Katie into bestsellerdom!

About the Book: Anna Goodrich is a 28-year-old artist in New York City, out on a Friday night in the city when she gets the call that her uncle has suddenly died. When she returns home to mid-coast Maine for his funeral, she faces all that she left behind when she left seven years earlier. The pain of her own mother’s death, the fractured relationships with her father and her first love. The life she had built for herself in New York – the art world, her boyfriend, her roommate who is also her best friend – allowed her to forget the grief and hurt she had left behind in Maine. But when her uncle leaves her a surprising inheritance, if forces her to face them, and the parts of her self she’s buried. As she searches for answers about herself, and where she belongs, she discovers how people and places shape us, and how understanding, forgiveness and grace have the power to transform us and the people we love.

July 24th at 7pm Jaimal Yogis: All Our Waves Are Water 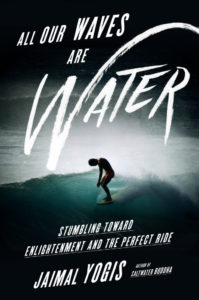 “Yogis, a surfer, journalist, and spiritual seeker, revisits and expands on the terrain of his previous memoir (Saltwater Buddha) in a quest that blends his search for surf and enlightenment in captivating ways. Descriptions of surf sessions in Indonesia, Mexico, and San Francisco are beautiful interludes. But the book’s power is in Yogis’s description of the seeking mind caught in its own currents–and occasionally transcending them–in places such as the Himalayas, a Franciscan friary in New York, and the Western Wall in Jerusalem. In this personal study on the elusive nature of mystical experience and its ability to evade the intellect, Yogis weaves together scientific research, the words of religious scholars and poets, and the wisdom of surfers and monks. From a Tibetan monk he learns how to reside in his own sadness and loss. Later, he discovers that even a “tropical beach in Mexico with a beautiful woman, nothing much to do except surf, be creative, meditate, and eat tacos” won’t bring him lasting peace. On Ocean Beach, he seeks balance between life as a journalist and his spiritual path. Yet Yogis finds wisdom everywhere. Yogis shows that the search for enlightenment, with its storms, lulls, and occasional thrills, is not much different from the search for the perfect wave.”  –Publisher’s Weekly 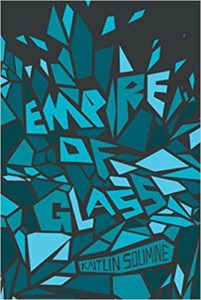 “A portrait of a soul,”–Sarah Shun-lien Bynum, finalist for the National Book Award

In the mid-1990s, an American teenager, named Lao K in Chinese, stands on Coal Hill, a park in Beijing, a loop of rope in her hand. Will she assist her Chinese homestay mother, Li-Ming, who is dying of cancer, in ending her life, or will she choose another path? Twenty years later, Lao K receives a book written by Li-Ming called “Empire of Glass,” a narrative that chronicles the lives of Li-Ming and her husband, Wang, in pre and post-revolutionary China over the last half of the twentieth century. Lao K begins translating the story, which becomes the novel we are reading. But, as translator, how can Lao K separate fact from fiction, and what will her role be in the book’s final chapter?

A grand, experimental epic–Lao K’s story is told in footnotes that run throughout the book–that chronicles the seismic changes in China over the last half century through the lens of one family’s experiences, Empire of Glass is an investigation into the workings of human memory and the veracity of oral history that pushes the boundaries of language and form in stunning and unforgettable ways.

Kaitlin Solimine has been a Fulbright Fellow in China, and has received several scholarships, awards, and residencies for her writing, including the 2012 Dzanc Books/Disquiet International Literary Program award for an earlier draft of Empire of Glass, judged by Colson Whitehead. Her fiction has been published in Guernica, the Kartika Review, and numerous anthologies. Kaitlin is co-founder of HIPPO Reads, a network connecting academic insights and scholars to the wider public. She resides in San Francisco with her husband and daughter, where she is a 2016 SF Grotto Writing Fellow.