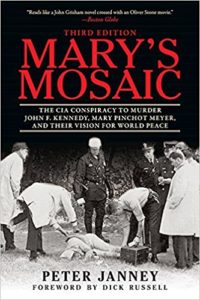 Who really murdered Mary Pinchot Meyer in the fall of 1964? Why was there a mad rush by CIA counterintelligence chief James Jesus Angleton to locate and confiscate her diary? What in that diary was so explosive? Had Mary Meyer finally put together the intricate pieces of a plan to assassinate her lover, President John F. Kennedy, with the trail ultimately leading to the CIA? And was it mere coincidence that Mary was killed less than three weeks after the release of the Warren Commission Report?

These are the questions that author Peter Janney finally answers in a way that no one else ever has. In doing so, he may well have solved Washington, D.C.’s most famous unsolved murder. Based on years of painstaking research and interviews, much of it revealed here for the first time, the author traces the key events and influences in the life of Mary Pinchot Meyer, including her first meeting with Jack Kennedy at the Choate School in 1936; her explorations with psychedelic drugs; her relationship with Timothy Leary; and finally how she supported the president as he turned away from the Cold War toward the pursuit of world peace in early 1963.
Peter Janney grew up in Washington D.C. during the 1950s and 1960s. His father was a high-ranking CIA official and a close friend of Richard Helms, James Angleton, and Mary Meyer’s husband, Cord Meyer. Janney’s mother and Mary Meyer were classmates at Vassar College.

You can see a book trailer for Mary’s Mosaic HERE 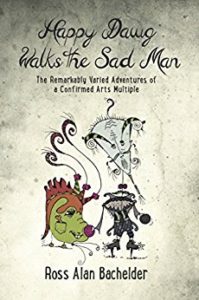 Happy Dawg Walks the Sad Man is a thought-provoking, seriocomic romp through the author’s more than fifty years of joyful immersion in the fine and performing arts. At the Heart of Happy Dawg Walks the Sad Man are twenty wide-ranging personal essays—some engagingly thoughtful, some heartrendingly poignant, some quietly hilarious, and some about people of high character and fundamental decency who’ve made a lasting difference in his life. Altogether, they chronicle a veritable cornucopia of creative projects Bachelder has either initiated or been involved in over the years as writer, musician, visual artist, and theater professional.

The book also includes more than eighty illustrations and nine playful, eccentric “tiny novelettes,” each written in response to drawings Bachelder did in 2008 while exploring the idea of the doodle as the fundamental vocabulary of all artists from the cradle to the grave.

The list of Bachelder’s creative experiences is remarkably long and varied. He spent three decades laboring in small-town, north-of-Boston theater companies, taking roles as a bit part actor, working as a pit orchestra musician, managing and publicizing three professional theaters, and founding his own theater for young people for which he wrote the plays and the music. Since then he’s run his own art gallery, managed a frame shop, chased live theater in London and Glasgow, founded the Seacoast Moderns (a group for abstract and experimental artists, based in the Kittery Art Association), and exhibited his multimedia artworks in galleries in Maine, New Hampshire, and Massachusetts. As the Flute Guy, he’s performed solo recitals, appeared in a wide array of special events, played at the Museum of Fine Arts in Boston, and, in 2011, traveled to the North Island town of Tauranga, New Zealand to perform at the opening reception for renowned New Zealand artist Susan Harrison-Tustain.

An absorbing story of two sisters on the road. When their mother dies in a car accident, the Chase sisters, 18-year-old Mary and 4-year-old Hannah (affectionately called Bunny), are on their own. Their connection is intense, “the line where one ended and the other began a malleable, gossamer thing,” but what Mary knows about the identities of the girls’ fathers she does not share. They leave their home and the motel their mother ran on the southeast coast to find lives elsewhere, slowly but surely trailing a kind of fate to the opposite coast. On the road, they have to cobble together funds, shelter, and food. Mary is smart, strong-willed, beautiful, and fiercely protective of Hannah. She knows how to use these powers to manipulate the men she encounters. The first of these is her second cousin’s husband, whom she blackmails for $10,000–a desperate but lifesaving move with major consequences.