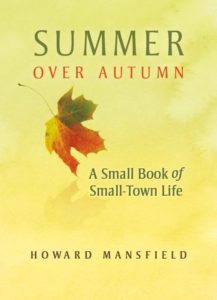 Howard Mansfield is one of our favorites, and every book from him is something new and unexpected. Mansfield’s new book  Summer Over Autumn is a small book of small-town life. He has written twenty-one short essays over the last thirty years, stories about neighbors, animals, tractors, trees, yard sales, funerals, money, and fidelity to time itself. It’s a book about the crooked path that is New Hampshire, about the parts that are postcard pretty, and the rougher parts that have a kind of hidden grace you have to live with to really see.

He doesn’t waste time with the “quaint postcard” view of a New England town, but shows readers where the real merit of small-town life lies. It can be found in the war waged against invasive, wild rosebushes, the hopeful placing of bets in the elm tree lottery, the artful dance of fundraising, and in bribing the band to play longer at the mechanic’s anniversary party. He brings us the hidden stories in one chair, a conversation in passing, or a Fourth of July fireworks display. Like Hancock’s crooked Main Street, the town and these stories are not just there for reminiscing; they are a “breathing lesson.”

Howard Mansfield is an everyday tourist and detective of the nearby. His ability to fully immerse himself in the here rather than rushing on towards there, has helped him create the wonderful essays in this small book full of big ideas. 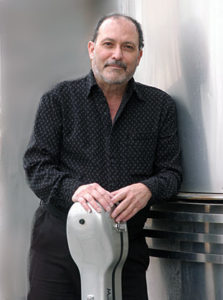 Lester Hirsh is a gifted guitarist, singer/songwriter, and poet. Performing on Spanish 6-string and acoustic 12-string guitar, his style ranges from classical, country, and folk, to Brazilian jazz and Flamenco. His repertoire includes original compositions as well as standards performed with intriguing percussive guitar riffs and harmonica.

Hirsh’s guitar style, singing, flair for humor, and ability to work the crowd, moved Cheryl Mansley of RiverHouse Concerts, Shepherdstown, WV, to describe him as a ‘One Man Traveling Party.’

Lester has performed in a variety of ensembles over the past 30 years – folk trio Side Three, Tampa, Florida, folk/pop trio Jerusalem, Williamsport, Pennsylvania, and duo Sweet River, Concord, New Hampshire. During that time Lester also honed his skills as a viable solo artist.

We look forward to hearing both music and poetry from Lester. We hope you will join us!

The final book in the Sun God’s Heir Trilogy

October 21st at 11am  Scott Nash, Children’s Author and Illustrator 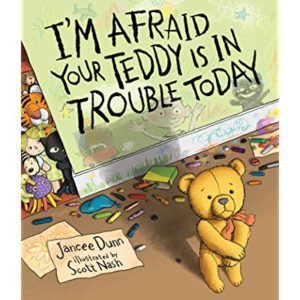 Scott Nash will be here to draw for you and tell stories! His latest work is the illustrations for a book called  I’m Afraid Your Teddy Is In Trouble Today. Scott is also well-known for his illustrations for the Flat Stanley books.

In 2004, Scott made his debut as author-illustrator with the publication of Tuff Fluff: The Case of Duckie’s Missing Brain, one of our all-time favorite books. He also created an illustrated novel called The High Skies Adventures of Blue Jay The Pirate. Scott has lectured widely and taught at Boston University, Northeastern University, and the Art Institute of Boston. He helped establish and is the chair of the illustration department at the Maine College of Art. Scott is a graduate of the Swain School of Design and holds a master’s in Graphic Design from Cranbrook Academy of Art. He lives with his wife, collage artist and illustrator Nancy Gibson-Nash, and their dog, Zephyr, on what he calls “a floating chunk of Portland” called Peaks Island, Maine.