This event will be at the Kittery Community Center

We are crossing the river next week because this event, hosted by the Kittery Democrats, was too good to miss. We will be on hand to sell copies of the author’s book, Call Me American. Don’t miss this!

In CALL ME AMERICAN, Iftin recounts his harrowing, extraordinary, and uplifting story. His love of western culture and music earned him the name “Abdi American” (which became a liability when Islamic extremism took hold of Somalia.) Evading conscription by al-Shabaab while secretly filing stories for NPR and the BBC under penalty of death, he stayed in Somalia until he had no choice but to flee. He smuggled himself into Kenya, where a different but grinding life of hopelessness awaited. (He spent days hiding silently in an apartment from raids by Kenyan police, once passing time reading The Art of the Deal by Donald Trump.) And then, a stroke of incredible luck: he won the Diversity Visa Lottery.

Abdi’s dramatic, deeply stirring memoir is truly a story for our time: a vivid portrait of the desperation refugees seek to escape and a reminder of why western democracies still beckon to those looking to make a better life.

The Kittery Community Center is at 120 Rogers Road in Kittery Maine. 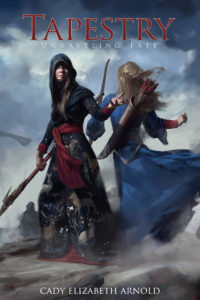 This is a drop-in event to meet the author. Come by any time!

Piscataqua Press is so excited to launch the third book in the Tapestry series.

“A glowing, potent fantasy tale for teens and adults.” – Kirkus

A huntsman with the scars of a warrior stumbles across a young girl in the forest. Mute and dressed in tatters, she cannot recall any memories from her past.

Come enter the kingdom of Blinth, where Tristam’s and Grace’s stories are interwoven as together they explore a time of yellow and blue.

At the end of Book II, Faith returns home to Blinth after a decade enslaved to the sisterhood of the Beast, only to discover she has been replaced. Her Father, Sir Tristam, has raised a waif he found in the woods as his daughter and named her Grace. Once the apple of her Father’s eye, Faith cannot forgive him for failing to rescue her from her abductors. Has she left dark Lolgothe behind, or does she carries it in her heart? Find out in Book III, Unraveling Fate!

Cady Elizabeth “Betsy” Arnold is a Social Worker who believes in the healing power of narrative. In addition, she believes in the beauty of the world, and the meaning to be found in relationships. She has the great good fortune to have served as a counselor in an elementary school, at two colleges, and in various other settings where students have shared their stories with her while on the path to healing and wholeness. Find out more at www.thetapestrybooks.com 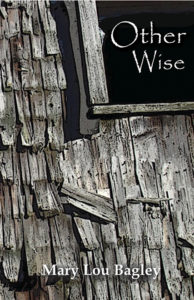 New author Mary Lou Bagley will be at RiverRun to read from her novel.

OTHER WISE introduces a cast of characters who will find their way into your dreams and beyond. Sixty-two-year-old Margaret Meader is both a native Mainer and an outsider. Though she’s not “from away,” many in her community deem her an oddity, an “other.” Plain-spoken and direct, Margaret is gifted with second sight—an intuitive ability to see beyond ordinary perception and distill what is seen to its practical essence. For decades her gift has benefited many while frightening others, often making her a target for jealousy, suspicion, and hatred. She has her friends and protectors, including the young Emily Donne, whom Margaret encourages to recover abandoned gifts of her own, the mystery that is her mother, and to learn who her long-dead father truly was. But even as Margaret supports friends in need and helps find those who are lost, some old business is coming back around, setting the stage for confrontations rooted in tragedies of the past.

This event will be held at 3S Artspace (319 Vaughan St., Portsmouth) 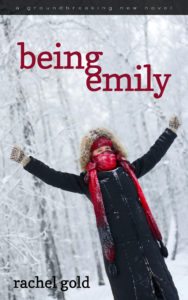 We are excited to partner with Seacoast Outright and 3S Artspace to host this event with Rachel Gold. We hope you will join us and also that you will help spread the word.  Being Emily was the first Young Adult novel to tell the story of a transgender girl from her perspective; we know adults enjoy it too, and think it would make a great family read.”

They say that whoever you are it’s okay, you were born that way. Those words don’t comfort Emily, because she was born Christopher and her insides know that her outsides are all wrong.

They say that it gets better, be who you are and it’ll be fine. For Emily, telling her parents who she really is means a therapist who insists Christopher is normal and Emily is sick. Telling her girlfriend means lectures about how God doesn’t make that kind of mistake.

Emily desperately wants high school in her small Minnesota town to get better. She wants to be the woman she knows is inside, but it’s not until a substitute therapist and a girl named Natalie come into her life that she believes she has a chance of actually Being Emily.

In this new, expanded version you will find:

Raised on world mythology, fantasy novels, comic books and magic, Rachel is well suited for her careers in marketing and writing. She is the author of multiple award-winning queer & trans Young Adult novels, including Being Emily (2012), Just Girls (2014), My Year Zero (2015), and Nico & Tucker (2017). As a marketing strategist, Rachel gives presentations and trains professionals on topics ranging from branding to search engine optimization. But if that makes her sound too corporate and stuffy, you should know that Rachel is an all around geek and avid gamer. She also teaches at The Loft Literary Center, including a course that is a roleplaying game. For more information visit: www.rachelgold.com.

The event will be held at WSCA Radio, 909 Islington St. in the West End. 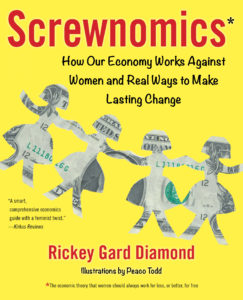 The personal is not only political, it’s also economic and sexual: as a society, we’re encouraged to view economics as objective science far removed from us―when in reality it has concrete and far-reaching effects on our everyday lives.

In Screwnomics, Rickey Gard Diamond shares personal stories, cartoons, and easy-to-understand economic definitions in her quest to explain the unspoken assumptions of 300 years of EconoMansplaining―the economic theory that women should always work for less, or better for free. It unpacks economic definitions, turns a men-only history on its head, and highlights female experiences and solutions. encouraging female readers to think about their own economic memoir and confront our system’s hyper-masculine identity.

In the past fifty years, the US has witnessed a major shift in economic theory, and yet few women can identify or talk about its influence in their own lives. Accessible and inspiring, Screwnomics offers female readers hope for a better, more inclusive future―and the tools to make that hope a reality.

Ms. Diamond will be interviewed on stage by WSCA personality Burt Cohen. Please join us!

August 23rd at 6:30pm: Shantigarbha I’ll Meet You There

This event will be held at the bookstore. 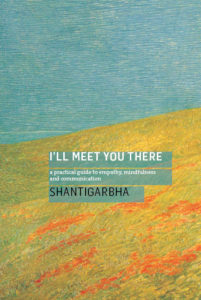 Shantigarbha is an experienced teacher of both Nonviolent Communication (NVC) and Buddhism; he is also a member of the Triratna Buddhist Order.

Shantigarbha is an international NVC trainer, certified with the International Centre for Nonviolent Communication. He teaches on CNVC’s International Intensive Trainings (IITs), is a CNVC Assessor-in-training, and serves on the Social Change and Peacemaking working group.

He has been practicing meditation and Buddhism since 1985, and in 1996 he was ordained into the Triratna Buddhist Order. He was given the name Shantigarbha, which means “seed of peace”.

Out beyond ideas of wrongdoing and rightdoing, there is a field. I’ll meet you there.

We get connected with each other in the space that opens up when we let go of our ideas of good and bad, right and wrong. When we feel safe and connected to ourselves, we don’t need to use these labels. When we are connected to ourselves, we are also connected to the people around us. It’s hard to find words to describe this field. In a sense it is beyond words. We are connected in such a way that it hardly makes sense to talk about us as separate beings. There’s just a sense of compassionate presence, intense closeness, and empathy. Through empathy we can find a way to stay connected to our humanity and to contribute to a more peaceful world. I’ll meet you there. – Shantigarbha, from the Introduction

Written with clarity and sensitivity, I’ll Meet You There is clear-sighted in its approach to healing and transformation. I encourage all who pick up this book to read it cover to cover.’ – Claude AnShin Thomas, Zen Buddhist Monk and Author of At Hell’s Gate, A Soldier’s Journey from War To Peace

‘An excellent book on empathy that teases out the centrality of this value in Buddhism  as the foundation for the cultivation of compassion and loving-kindness.’ – Stephen Batchelor, Buddhist teacher and author

We are excited to bring author David Moore to town for this great book about recent Portsmouth history!

In the fall of 1973, Aristotle Onassis arrived on the New Hampshire Coast to scout out plots of land. Greek oil shipping tycoon and the husband of President John F. Kennedy’s widow, Aristotle was one of the world’s richest and famous men who was convinced his plan would go off without a hitch. His project had already received the support of governor, Meldrim Thomson and by William Loeb, publisher of the Manchester Union Leader. 1,254 residents, when faced with the decision to support the plan that would decimate the beauty of the seacoast town, resounded with a strong no to the plan.
Join us at The Portsmouth Athenaeum, right in Market Sq., for this great event.