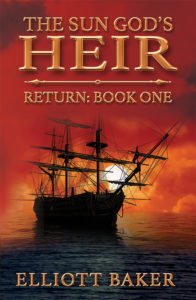 Elliott Baker was one of three winners in the 2016 Piscataqua Press Novel Contest. His book, Return, is the first in the Sun God’s Heir trilogy. It’s a strange and wonderful combination of The Three Musketeers, The Mummy, and Patrick O’Brian.

The Sun God’s Heir is a swashbuckling series, set at the end of the seventeenth century in France, Spain and northern Africa. Slavery is a common plague along the European coast and into this wild time, an ancient Egyptian general armed with dark arts has managed to return and re-embody, intent on recreating the reign of terror he began as Pharaoh. René Gilbert must remember his own lifetime at the feet of Akhenaten to have a chance to defeat Horemheb. A secret sect has waited in Morocco for three thousand years for his arrival.

Elliott Baker is an award-winning novelist and international playwright with four musicals and one play published and performed throughout the United States, as well as productions in New Zealand, Portugal, England, and Canada. Elliott is pleased to release his first novel, Return, book one of The Sun God’s Heir trilogy. A member of the Authors Guild and the Dramatists Guild, Elliott lives in New Hampshire with his wife Sally Ann 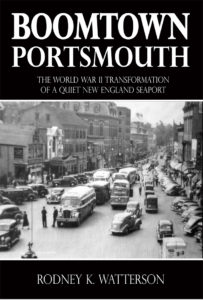 Did you get Boomtown Portsmouth for Christmas? If you did, now’s the chance to meet the author in person and get your book signed. Mr. Watterson will talk about his book, show us some great vintage photographs, and sign copies.

Portsmouth’s World War II legacy is well hidden. The city’s narrow streets, which offer frequent glimpses into its heyday during the era of sailing ships and colonial struggles, reveal little of the events that occurred on those same streets during World War II. Yet it is that wartime transformation that revitalized the city and equipped it to move so boldly into the future that it enjoys today. Boomtown Portsmouth tells the story of that frenzied transformation—a story with many subplots: booming navy yard, hordes of immigrant workers, a flood of federal dollars, burgeoning population, unprecedented prosperity, U-boat threats, a mined harbor, blackouts, raucous liberty town, soaring VD rates, massive infrastructure development, and much more. The story concludes with an aggressive postwar plan designed to capture the best and shed the worst of that wartime experience—first steps on the path that led, in time, to the prized jewel that Portsmouth is today.

RiverRun is so pleased to announce that we will be partnering with Bob Comenole of Waterline Writers Academy to provide fantastic, eclectic, and affordable writing workshops in Portsmouth, starting soon.

To meet Bob and get a sense of what WWA has to offer, we are holding a free two-hour workshop, Keeping an Artist’s Journal, on January 24th. Please email or call us to register. 603-431-2100 or riverrunbookstore@gmail.com

The Waterline Writers Academy offers a broad range of workshops that focus on developing creative, professional & personal writing. Our seminars are designed for both beginning writers who wish to learn fundamental techniques as well as seasoned writers wishing to acquire more advanced skills; there are no prerequisites. 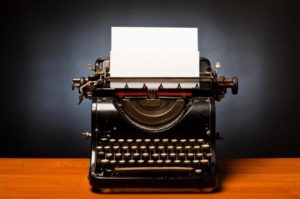 Our poetry series is back and ready for 2017. We feature three young poets at 7:00pm, followed by an open mic, so bring your best poem to share. Once again, Tamara Collins will be our host, and this month she welcomes Cayden O’dea, Shane Morin, Todd Downey

Evan, chef and co-proprietor with his wife Denise of the renowned Black Trumpet at 29 Ceres St. in Portsmouth, is a James Beard semi-finalist for Best Chef, Northeast (2011, 2013, 2014). He is actively involved and sits on the boards of Chef’s Collaborative, Slow Food Seacoast, and the Heirloom Harvest Project, an initiative to join farmers, chefs and educators to identify and restore a food system native to the greater NH Seacoast.

Elee Kraljii Gardiner is the author of the book of poems Serpentine Loop (Anvil Press), one of 2016’s “most anticipated spring releases” and already in its second printing. She is the co-editor with John Asfour of V6A: Writing from Vancouver’s Downtown Eastside (Arsenal Pulp Press, 2012), which was shortlisted for the 2012 City of Vancouver Book Award. Elee founded Thursdays Writing Collective, a non-profit organization of more than 150 writers in Vancouver and she is the editor and publisher of its eight anthologies. She is originally from Boston and is a dual US/Canadian citizen. www.eleekg.com

These writers have known each other for two decades and although they work in different creative environments Evan and Elee share an interest in how we form community- through foods, activities, geographies. Evan’s recipes and stories are an outgrowth of his extensive experience considering local New Hampshire farming, foodsheds and cuisine. Elee’s poems grow from the ground of the Northeast where she was raised (and Pacific Northwest where she now lives) to explore the similarities of the serpentine loop, a shape traced in figure skating, with the way we include and exclude each other. Another intersection: Elee is a poetry ambassador for Vancouver poet laureate Rachel Rose and an editor for Sustenance, her anthology of food writing to which Evan is contributing.

Evan and Elee will each read/talk for about 20 minutes and a Q&A at the end.